About 250 domestic and international experts, who are researchers, scientists, and professors contributing to advancement of public health, participated in the symposium, where Dr. Miock Mun, the First Vice Minister of Science and ICT, Mr. Who-Seok Oh, the Assistant Governor for Economy of Gyeonggi-do, delivered special remarks.

This symposium was initiated by Institut Pasteur Korea with an aim of having borderless discussions about countermeasures for the emerging infectious diseases threatening the world across borders, such as the MERS, Zika and Ebola virus infections. To this end, specialists and leaders of Institut Pasteur International Network located in 7 countries, including France, China, Hong Kong, Vietnam and Cambodia, gathered together in Korea. 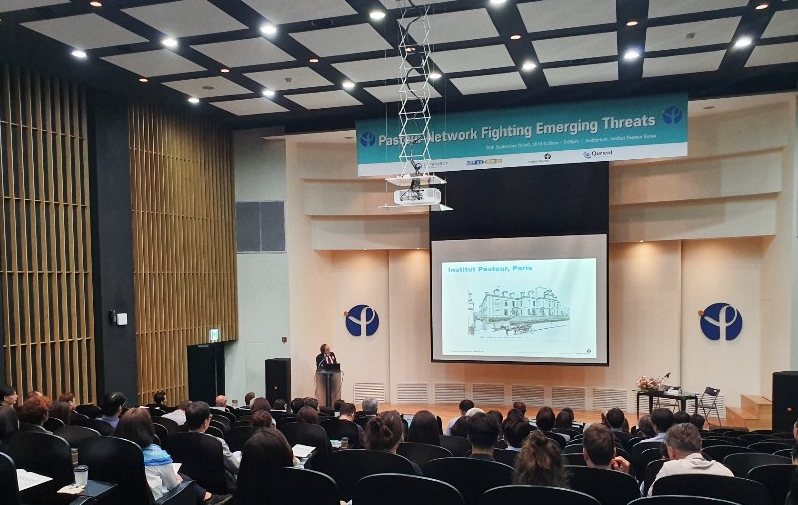 Among the symposium speakers, Dr. Hong Tang, Director General of Institut Pasteur of Shanghai–Chinese Academy of Sciences, shared the latest findings on the impact of pre-existing cellular immunity to the Japanese encephalitis virus to Zika virus infection, and Dr. Vincent Enouf of Institut Pasteur, France introduced the Pasteur International Bioresources network leveraging microbial strain biobank and expertise in microbiological analysis. Dr. Marc Windisch, Executive Director of Discovery Biology Division of Institut Pasteur Korea, shared a strategy of repositioning the US FDA-approved drugs for the treatment of Ebola virus infection. In addition, Dr. Kien Quoc Do of Prevention and Control Department of Institut Pasteur in Ho Chi Minh City, shared the important issues related to the mosquito-borne diseases, such as Dengue and Zika virus infections, that are putting public health in a serious risk in Vietnam. Dr. Seungtaek Kim, Head of Zoonotic Virus Laboratory of Institut Pasteur Korea, talked about the latest progresses made in development of antiviral compounds against MERS-Coronavirus.

In the congratulatory remark, the First Vice Minister Dr. Miock Mun highlighted, “To effectively respond to the infectious diseases spreading across borders, international cooperation and collaboration is crucial.”, and added, “Collaboration with Institut Pasteur International Network, which has unique research capabilities and expertise in infectious diseases, will lead us to develop our research to the next level." The Assistant Governor Mr. Who-Seok Oh said, “Gyeonggi-do has been cooperating with Institut Pasteur Korea since its relocation to Pangyo.”, and added, “Gyeonggi-do, with the central government, will provide active support for Institut Pasteur Korea which is committed to fight infectious disease threatening our nation and the humanity."

Dr. Pierre-Marie Girard, Executive Vice-President for International Affairs of Institut Pasteur, France said in the keynote speech, “Institut Pasteur Korea, as a member of the Network, can be a portal for Korean researchers to access to various funding and capacity building, such as scientific and public health expertise, technical resources, and a pool of potential partners across the world.”, and added, “For Korea, a world leader in high technology and scientific research, we hope to provide ideal instruments to anticipate and address future risks related to infectious diseases and to develop the country's potential to become a major player in global health.”

Institut Pasteur Korea, established with the support of the Ministry of Science and ICT and Gyeonggi-do to build national capacity in drug discovery R&D, has been a leader in drug discovery for infectious diseases, such as infections by emerging virus or super bacteria and tuberculosis, by utilizing an innovative image-based drug discovery platform.

Institut Pasteur International Network is centered around the first Institute Pasteur founded by Dr. Louis Pasteur in Paris, France in 1887, and consists of 32 institutions located in 25 countries around the world. 23,000 researchers in the Network, presenting in numerous endemic areas, are united by the shared values and missions for the benefit of populations and have demonstrated the major role as a sentinel for emerging infectious diseases.