September 27, 2019, Gyeonggi-do | The Institut Pasteur Korea (CEO, Wang-Shick Ryu) investigated the stability of hepatitis B virus (HBV) at high temperatures and observed that the virus remained infectious after 2 minutes incubation at a temperature close to water boiling point (98°C). The results were published online in the Journal of Hepatology on September 5, 2019.

Two billion people worldwide have been infected with HBV, including 257 million chronic carriers. Up to 30% of chronically HBV-infected patients will develop liver cirrhosis or life-threatening hepatocellular carcinoma. Therapies are available; however, current treatment regimens are not curative, requiring lifelong therapy.

HBV is a highly contagious pathogen and about 100 million to 10 billion particles per milliliter of blood are circulating in infected patients. Important to note, less than 10 HBV particles are sufficient to transmit the virus to another human. Consequently, even small amounts of blood may pose a risk of HBV transmission.
Early in 2019, scientists at the Institut Pasteur Korea and the Ruhr University Bochum in Germany reported that HBV particles are highly stable for nearly one year at room temperature (21°C), refrigerator temperature (4°C), and also stable for at least for one month at body temperature (37°C). (J Infect Dis. 2019 Mar 15;219(7):1044-1048). Now, the research teams went a step further and asked themselves what might happen at higher temperatures, even at water boiling point. Prof. Marc Windisch, Director of the Discovery Biology Division at Institut Pasteur Korea said, “This question is of importance in respect of how, e.g., medical instruments or devices are being decontaminated after their usage and exposure to human blood.”

To answer this question, the scientists teamed up with Prof. Seung-Kew Yoon, clinician at the Catholic University Liver Research Center in Korea, to test the heat stability of patient-derived virus. Patient-derived HBV has the advantage to more closely resemble the real-life situation such as in hospitals. The scientists incubated this virus at approx. water boiling temperature (98°C) and observed that the infectivity of the virus was significantly reduced, however, residual infectious patient-derived HBV particles were still detectable after 2 minutes of incubation, whereas the virus was completely inactivated when incubated at a temperature of 98°C or higher for a minimum of 5 minutes (J Hepatol. 2019 Sep 4. pii: S0168-8278(19)30489-1 ). And, to be confident that they did not miss any infectious virus particle, the scientists at Institut Pasteur Korea extended their experiments to up to five weeks post-inoculation of liver-derived cells. Such detailed studies became possible thanks to the cell culture platform recently developed by Prof. Windisch’s lab, supporting long-term infection with HBV (J Hepatol. 2019 Aug;71(2):289-300).

“We were all surprised by the high thermal stability of HBV. Other viruses like the hepatitis C virus are already inactivated at temperatures of 80°C,” said Prof. Eike Steinmann at the Ruhr University Bochum. Prof. Windisch commented, “The results underline the importance of strictly following the guidelines for HBV prevention and control.” 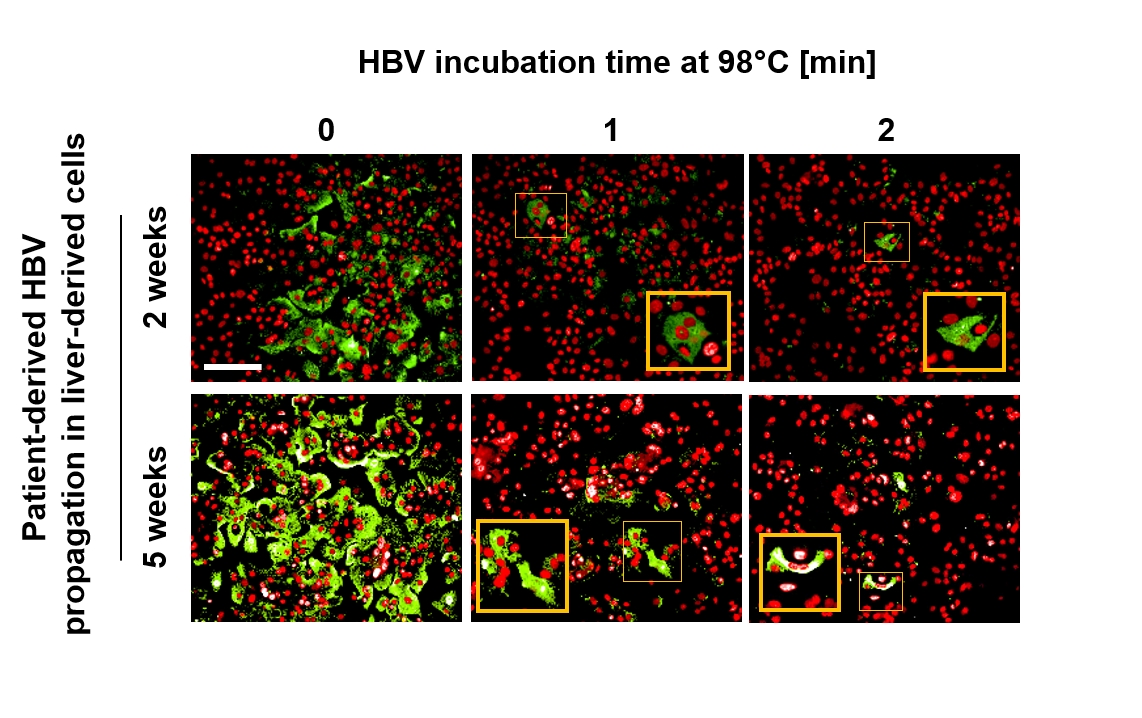 [Figure] Heat treatment of patient-derived hepatitis B virus (HBV). Patient-derived HBV particles were incubated at 98°C for 0, 1, or 2 minutes, followed by inoculation of liver-derived cells and propagation of newly produced HBV over 2 or 5 weeks before infectivity determination via immunofluorescence analysis. Magnification of HBV infected cells (yellow boxes).

This research was supported by The Ministry of Science and ICT, Gyeonggi Province, etc., and the important scientific breakthrough has been made possible by an orchestrated effort of Korean and German scientists and clinicians. Many years of intense and interdisciplinary collaborations of Prof. Windisch’s lab with Prof. Steinmann, and Prof. Yoon, with the common goal to make a difference in HBV research to the benefit of the patient.