Fundación MEDINA, the Drugs for Neglected Diseases initiative (DNDi) and Institut Pasteur Korea have been awarded a grant of EUR 995,000 from “la Caixa” Health Research 2020 program to identify novel natural products as potential effective treatments for leishmaniasis and Chagas disease.

Leishmaniasis and Chagas disease are neglected tropical diseases that cause thousands of deaths worldwide each year. They primarily affect poor and marginalized communities in developing countries but are an emerging health problem in developed countries as well. New therapeutic solutions are urgently needed for both diseases given the many drawbacks of current treatments, including increasing drug resistance and undesirable side effects.

The MEDINA-DNDi-IPK joint project addresses this challenge by exploring the chemical diversity of MEDINA’s vast microbial natural products libraries, using the whole-cell phenotypic screening assays of Institut Pasteur Korea. In addition, a new image-based “parasite painting” assay with cutting-edge cell-imaging technology will be developed at Institut Pasteur Korea to identify new modes of action of novel compounds and to select the most promising compounds for further development. 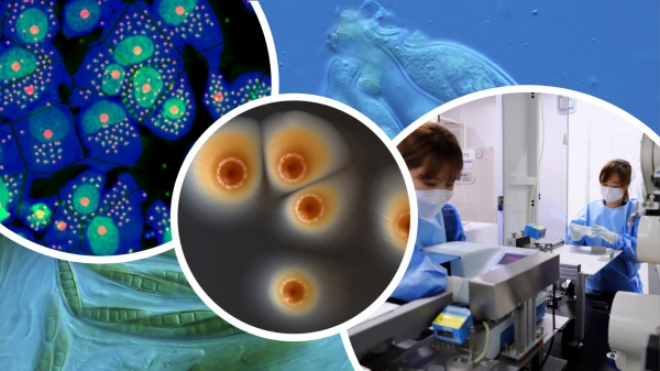 “We believe that this unique partnership and our multidisciplinary approach is an excellent opportunity to strengthen the relatively empty preclinical R&D pipeline for both diseases. Together, we are proposing an innovative drug discovery approach exploring natural products libraries in neglected tropical diseases,” said Dr Olga Genilloud, Scientific Director at Fundación MEDINA and Project Leader.

“We are very excited to launch this new discovery project using a brand-new technology that will give us new data on parasites’ action mechanisms,” said Dr Jean-Robert Ioset, Senior Discovery Manager at DNDi. “Although they have a strong track record in anti-infectives research and development, natural products are still underexplored for neglected tropical diseases.”

“This project is truly a global collaboration between the leaders in field of natural product discovery, high content/high throughput screening and NTD drug discovery. We believe this synergistic and complementary effort will lead to the discovery of novel natural product-based anti-kinetoplastids drugs,” said Dr Joo Hwan No, Group Head of Leishmania Research Laboratory at Institut Pasteur Korea.

The three-year funding from this highly competitive program from La Caixa reinforces the ongoing collaboration between three global leaders. Coordinated by Fundación MEDINA, the project will leverage existing preliminary data from the established partnership and take advantage of the joint expertise of the consortium, which brings together a centre of excellence in natural product drug discovery (Fundación MEDINA), a pioneer in image-based high-content screening with kinetoplastids (Institut Pasteur Korea), and an international not-for-profit research organization developing new treatments for people living with neglected diseases (DNDi).

About leishmaniasis
Leishmaniasis is a neglected tropical disease that threatens an estimated one billion people worldwide. It is a complex disease that presents in several forms – visceral, cutaneous, mucocutaneous, and post-kala-azar dermal leishmaniasis – and is caused by 20 different Leishmania parasite species. An estimated 700,000 to 1 million new cases of leishmaniasis occur annually, with 20,000 to 30,000 deaths. Treating leishmaniasis is difficult, as it depends on several factors, including the form of the disease, other co-existing infections, the parasite species, and geographic location, as treatment responses differ by region. Existing treatments for leishmaniasis are long, toxic, and/or expensive, and are not adapted to patients or their contexts. The development of next-generation treatments for all forms of leishmaniasis in all regions should therefore be a priority.

About Chagas disease
Caused by the protozoan Trypanosoma cruzi and transmitted by biting insects known as ‘kissing bugs’ that are infected with the parasite, Chagas disease is endemic in 21 countries in the Americas, although the migration of people who carry the illness can take it to other parts of the world. The Pan-American Health Organization (PAHO) estimates that Chagas affects approximately 6-7 million people, with 30,000 new cases and 14,000 deaths per year. Additionally, there are 70 million people at risk of contracting the disease. As people typically show no symptoms for many years, most are unaware they have Chagas. Up to a third of people with Chagas will suffer heart damage that becomes evident only many years later and can lead to progressive heart failure or sudden death. Chagas kills more people in Latin America each year than any other parasitic disease, including malaria.

About Institut Pasteur Korea
Institut Pasteur Korea (IPK) is an infectious disease-focused research institute located in the Rep. of Korea. With the aim of addressing unmet global health issues, IPK utilizes its proprietary cell-based screening platforms to understand disease mechanisms and accelerate the development of new treatments. IPK is a member of the Institut Pasteur International Network (IPIN), constituting 32 member institutes in 25 countries across the five continents, where it plays a key role in driving early drug discovery. By providing fundamental technologies to bridge between Korean and international bio-pharma science and promoting multi-disciplinary projects, IPK stands at the forefront of drug discovery research that contributes to the scientific, intellectual, and technical resources of the Rep. of Korea. (www.ip-korea.org)

About Fundación MEDINA
Fundación MEDINA is a not-for-profit research organization established as a Spanish public-private partnership between Merck Sharp, Dohme de España S.A., the Regional Government of Andalusia and the University of Granada to discover new drugs for unmet medical needs. Fundación MEDINA is a recognized international leader in natural products discovery and develops collaborative programs with academic and industrial partners worldwide. Taking advantage of its unique microbial natural products libraries and cutting-edge technology screening platforms, MEDINA is actively developing drug discovery programs focused among others on the identification of new drugs for infectious diseases, including neglected tropical diseases (www.medinadisovery.com).