Dr. Youngmee Jee, the CEO of Institut Pasteur Korea (IPK), held the 2022 2nd half all-staff meeting on July 4th at the auditorium of IPK.

As main agendas, Dr. Jee briefed key activities and achievements in the first half of 2022, including research cooperation and exchange activities, the status of new R&D projects, paper publications, and the mid-to-long-term R&D strategic plan, and encouraged all members for their hard work and outstanding performances. 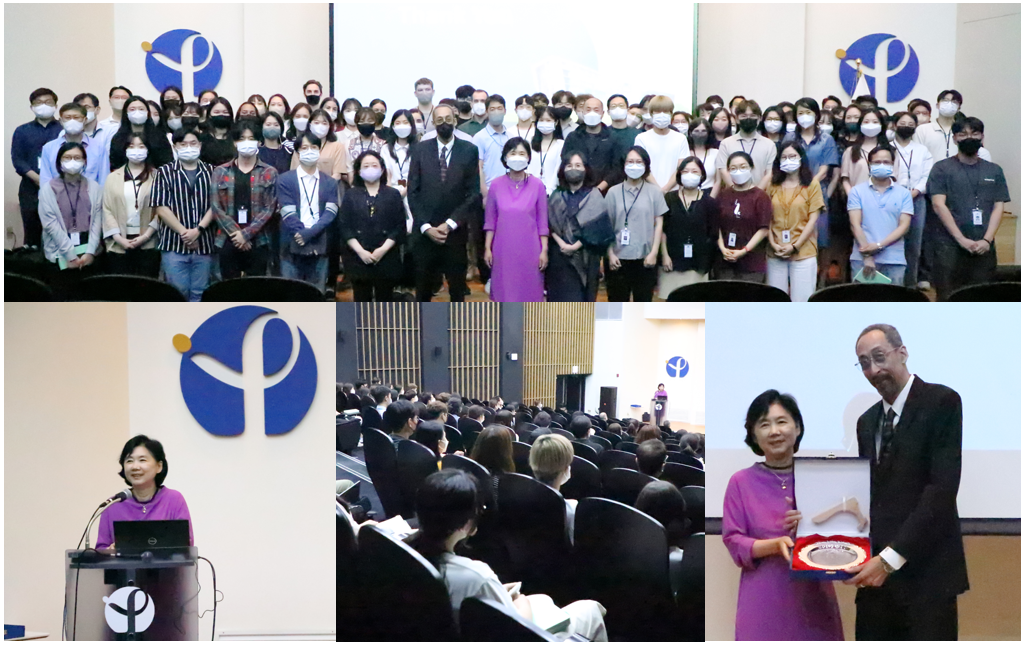 In particular, various efforts to strengthen domestic and foreign research cooperation were introduced: Activities as a representative of the Pasteur Network Asia-Pacific region, signing of a memorandum of understanding with domestic and foreign leading institutions, such as the Doherty Research Institute in Australia and Seoul National University Bundang Hospital, and taking follow-up actions, and participating in major domestic conferences, including the ones held by the Korean Society for Biochemical and Molecular Biology (KSBMB), etc.

In addition, she mentioned that new research projects supported by leading domestic and foreign institutions in public health, such as the Pasteur Network, GLoPID-R, and the National Institute of Health, were increased, and the screening technology service for the partners in the industry, academia, and institute at home and abroad was expanded.

She also discussed major plans for the second half of the year. Major milestones included the HCS education and training program (8.29~9.2), IPK’s mini-symposium in the Korean Society of Molecular and Cellular Biology International Symposium (9.28~30), the Pasteur Network Symposium on AMR (10.7), and the 2022 IPK international symposium (11.9).

A farewell ceremony for Dr. Spencer Shorte, who is planning to return to the Institut Pasteur after a five-year term of office as the IPK CSO, was followed. Dr. Jee delivered a commemorative plaque expressing gratitude for his hard work on behalf of all IPK members. Dr. Short will serve as a Director of the Center for Technological Resources and Research (C2RT) in Institut Pasteur, which is responsible for advancing the technology of Institut Pasteur, and will continue to cooperate with IPK.

Dr. Jee has been holding all-staff meetings twice a year, in the first and second half of the year since taking office in 2021. This time the meeting was held as the first offline meeting in accordance with the COVID-19 quarantine rules.
LIST