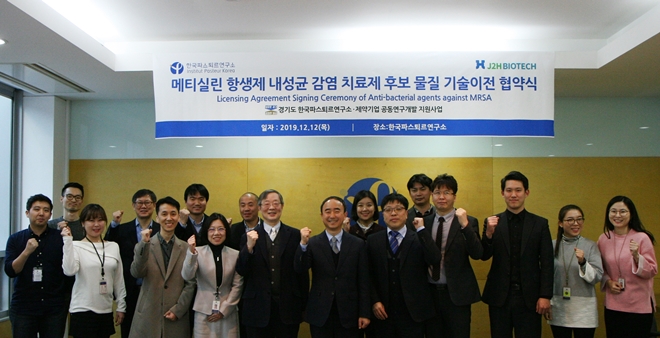 Antibiotics have contributed greatly to the development of mankind. However, the misuse and abuse of antibiotics have accelerated the natural mutations of bacteria, and resulted in the emergence of resistant bacteria, including super bacteria which are resistant to almost all antibiotics currently available.

The whole world is raising voice on the issue of antibiotic resistance. In 2018, the World Health Organization addressed that antibiotic resistance is one of the biggest threats to all mankind and effective treatment options are running out. The British government also warned through its 5-year action plan for antimicrobial resistance that, if not responded promptly, an annual mortality would increase to 10 million by 2025, higher than the mortality from cancer, and cumulative socioeconomic costs will be 100 trillion USD. Currently, healthcare costs of Korea for treating domestic super bacterial infections are estimated at 500 billion KRW.

The joint research team focused on the methicillin-resistant staphylococcus aureus (MRSA), which is known to be a major cause of nosocomial infection. MRSA infections are a serious problem particularly in Korea, with methicillin-resistant bacteria are found in about 70 percent of patients with staphylococcus aureus infections in hospitals. The MRSA are known as super bacteria resistant to most antibiotics.

Effective control of super bacteria requires innovative drugs with new mechanisms of action. Researchers at Institut Pasteur Korea searched for new compounds that have antibacterial effects on MRSA on the basis of basic research conducted on the physiology and resistant mechanisms of bacteria. By analyzing the efficacy of about 100,000 compounds using target-free image-based high throughput screening (HTS) technology, researchers successfully identified a new drug candidate that kill resistant bacteria with new mechanisms of action unknown to date. J2H Biotech chemically analyzed and optimized the candidate to have more drug-like properties, and Institut Pasteur Korea verified the efficacy of the optimized candidates through its in-house developed infection models.

Dr. Soojin Jang, the head of Antimicrobial Resistance Lab, said, "We are pleased to work with J2H Biotech and provide a foundation for effective control of the super bacteria that are rapidly spreading worldwide," and added, "We hope further research will lead to the development of new antibiotics."

"As the super bacteria can also be infected through daily necessities such as toothbrushes and towels, thorough hygiene management and efforts to prevent the spread of infection are necessary. In particular, methicillin-resistant bacteria are fatal pathogens that can cause sepsis or death due to organ failure and development of effective therapeutics are urgently needed. Through active collaboration with Institut Pasteur Korea, we will accelerate the development of new antibiotics.” said Hyungchul Ryu, CEO of J2H Biotech.

Institut Pasteur Korea is taking part in international activities to overcome antibiotic resistance throughout a research collaboration of screening and identifying new drug candidates with GARDP. GARDP is a not-for-profit organization established in 2016 by the World Health Organization and DNDi for the purpose of accelerating the development of new and improved treatments for drug-resistant infections.

The collaborative research was conducted with the support of Gyeonggi Province and the Ministry of Science and ICT of Korea. In particular, the Gyeonggi provincial government has supported Institut Pasteur Korea and five pharmaceutical companies in the province for three years from 2016 to 2019 to 2019 to strengthen their research capabilities.
LIST